The Pionus Parrot is a medium-sized parrot native to Mexico and South America. Characteristics of Pionus parrots are a chunky body, bare eye-rings, and short square tails.

The cage should be spacious as small cages make the bird sedentary and overweight. Toys can be put inside the cage for entertainment purpose.

Blue-headed pionus make good pets, being easy-going and fun-loving. Even though they do not have much talking ability, they are a better option than many loud and noisy species due to their peaceful nature. Affectionate, and sociable, the birds respond well to training, enjoying direct contact with the owner, like a head scratch. They are known to be independent as they engage themselves with food and toys without being constantly monitored by you.

They are less aggressive than other parrot species and tend to bite less often. However, during their breeding season, the temperament of the males is very aggressive towards their mates and keeper as well. 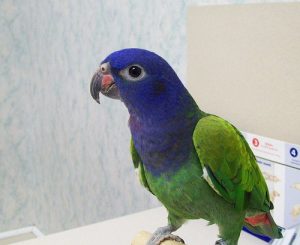 Regular bath will help maintain healthy plumage and skin. Care should be taken not to trim the wing feathers too much as they tend to fall and get injured.

They should be given high quality formulated pelleted food with fresh fruits and vegetables. With a proper diet, they do not require additional nutritional supplements. However, as they are known to be prone to vitamin-A deficiency, consulting a doctor may be necessary if you notice any warning signs, like patchy feather-loss. Although, ringworms may also cause the same symptom.

The Blue-headed Parrot is a medium-large parrot, averaging 11 inches (28 cm) in length and its weight range is between 200 to 260 grams.

The plumage of the adult Blue Headed Pionus is generally green. The head, neck and upper breast are a deep blue.  There is a red base on the feathers on their necks that show through.  They have black patches on their ear coverts (feathers covering the ears) and the undertail is red. There is some yellow on the wing coverts. Their bill is blackish with red at the sides.  The skin around their eyes (periophthalmic ring) is grey and their irides (= plural of iris) are a dark brown.  Their feet and legs are grey.

Both males and females look alike. DNA or surgical sexing is recommended for those desiring to determine the gender.

They feed on fruits, seeds, berries and blossom.  They are also considered “crop pests” as they cause considerable damage to cornfields.

Blue-headed Pionus Parrots are increasingly popular as pets. They are very affectionate and although they are not birds that particularly enjoy being cuddled, they do love a head scratch.

They are quite independent birds, they are happy to amuse themselves with toys and food without constant attention from the owner. Well-socialized pionus parrots really enjoy interacting with people.

There are no reviews yet.